Over the past few weeks, eager students across the state head back to school, backpacks brimming with pencils, notebooks and calculators.

But what will happen after the excitement of a new school year wears off? Will daily attendance become their routine, or will chronic absenteeism?

The Georgia Department of Education has released a remarkable series of statistics on graduation rates and student absenteeism. Most striking among these findings? If a 9th-grader misses more than 14 days of class in a school year, the chances of graduating high school on time three years later diminishes by more than half. 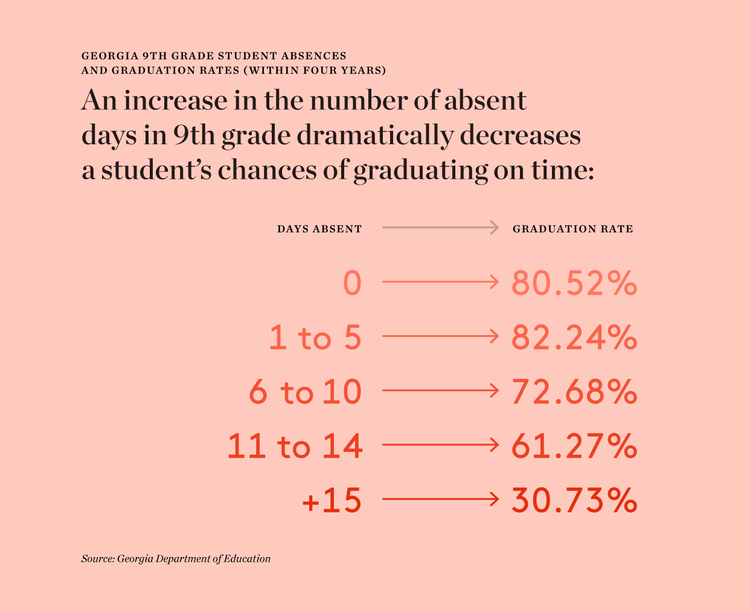 Parents, teachers and child advocates don’t need research to tell them that absenteeism will set their children back. Even one day away from class can lead to missed lessons, make-up tests and some scrambling to get caught up. And, when a child enters the “chronically absent” territory, he or she is can easily fall significantly behind their peers.

While these are just the immediate consequences, the long-term effects are even more harmful. Research shows that when a child misses more than two weeks of class, her test scores go down and her chances of dropping out go up. Students who drop out of school are less likely to graduate on time — if they come back at all — and less likely to attend college after high school. They are even less likely to get the skills and training they need to secure a sustainable career.

It’s clear that leaving high school without a diploma can impact a child’s entire life trajectory, leading to lower levels of financial independence and lowered physical and mental wellbeing. What’s more, because chronic absenteeism is highest among low-income students, financial and personal well being can become even more challenging for our system’s most disadvantaged youth.

As the new school year begins, it’s critical that parents and students understand the importance of daily attendance and take on the challenge of making sure our kids attend school every day. But it is equally important for us to remember that, combatting chronic absenteeism isn’t a parent and student issue alone.

Brooke Haycock of The Education Trust recently reviewed the U.S. Department of Education’s chronic absenteeism rates, finding that “the numbers left dry-throated educators, policymakers, advocates, and education reporters alike stammering for a narrative to cushion the hard blow of the data and to try to explain how so many students went chronically missing from our classrooms in one school year alone….[a]larmingly absent, however, was much of any mention of schools.”

Teachers, counselors and school administrators can play a huge role in this effort. There should be policies in place that, among other things, track and encourage daily attendance, reduce suspensions, and intervene early to confront truancy.

Ms. Haycock identified five lessons from schools and educators that are actively working to end chronic absenteeism. The Georgia Department of Education has an entire webpage devoted to strategies aimed at improving student attendance. This shows that we can all play a role in confronting this crisis.

So, lets be mindful of the long-term effects of daily attendance. Because, as the saying goes, showing up is half the battle.

Michael O’Sullivan is the executive director of GeorgiaCAN.